The term sommelier dates back to the middle ages, where a “sommerier” was one responsible for loading cargo onto beasts of burden. While there was no more valuable cargo than wine in the Middle Ages, the term was not specific to wine transport. No nobleman went on a crusade or into battle without bringing wine along and a slight spelling modification and “sommelier” became the term for managing the storage, procurement and eventually service of wine.

It wasn’t until the late 1700’s that restaurants had menus where a variety of food was made to order, this evolution in restaurants combined with the recent availability of wine by the bottle brought about the need for a cellar of bottles to be kept on hand for guests. Wine has only been available in bottle format for the past couple hundred years. This bottling and storage technology enabled restaurants to offer a much wider variety of wines than had previously been available to serve from cask or amphorae. The previous tasks of a “wine butler” for the aristocracy or nobility were modified to include service to guests in a restaurant. A wine butler would taste the wine before service to ensure it was still palateable and hadn’t spoiled. Even today several sommeliers will still wear a “tastevin” to be used to taste the wine before the guest, ensuring the wine is still in acceptable condition. It’s an odd ritual and not often appreciated, especially when the major faults of wine show on the nose more clearly anyway. If one purchases a $1000 DRC and anyone else wants even a taste of it, they should pitch in!!

In most of Europe, a sommelier is simply a “wine waiter.” It’s very similar to the word “chef” in its broad application. After the French Revolution, many of the cooks and wine stewards of the nobility were left looking for jobs and cooking for the public in restaurants became a place to continue working their trade. However, the word “chef” still more easily retains its ability to be used as the title for a working position as much as for an accredited position. One who runs a kitchen is accepted as a “chef” with or without formal training, one who manages a wine program from bottle to glass is a “sommelier” regardless of any third party certifications. 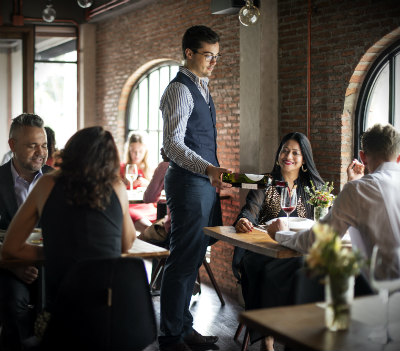 With the average consumer not understanding the history of these rituals, they are often imagining the tasting process is to ensure they “like” the wine. This was never the case. Previously the wine butler only managed the care of their master’s cellars and seldom chose any actual wines. Nowadays, the somm may be responsible not only for managing the storing and serving of the wines, but possibly also for selecting wines for a restaurant.

Over the years several organizations have arisen to certify individuals as a sommelier. They each have developed their own curriculum based on the foundations of wine service. There is the International Sommeliers Guild, International Wine & Spirits Guild and most notably the Court of Master Sommeliers. The Court has gained prominence by very effective self promotion and most of the big names in the sommelier field have been through the Court’s rigorous tasting and testing series of exams.