It is often assumed that I get to travel all over the world or at least to California in order to pick the variety of wines used at the school or served and sold at Bitto Bistro and Orchard Wine Cellar. However this is only assumed by those who don’t own their own businesses! After 10 years in the restaurant business, I was finally able to take a trip out to wine country for a few days and visit with some of the winemakers we've supported over the years. Despite the torrential (but welcome!) spring rains, my wife and I drove up from San Francisco through Berkeley, past Sonoma to the beautiful wine utopia that is Healdsburg.
Before leaving Berkeley, we stopped at the hip and urban Broc Cellars to visit with winemaker Chris Brockway. So often I see new products hitting the market that are “different” for the sake of being different, some attempt at differentiation based on shock value or trying to catch the “bleeding edge” of an upcoming trend. Hipster winemakers backed by some venture capital and a social media campaign with the actual wine being a second thought resulting in overpriced cult crap. And here in downtown Berkeley is a winemaker vinifying Nero d’Avola, Counoise, Picpoul, Valdiguie, Carignan, Marsanne, Rousanne and a sparkling Chenin Blanc? It takes just a moment to realize Chris is much more a treasure hunter or mad scientist than hipster. Treasure hunter in that he has embarked on a quest to coax remarkable nuance and potential from varietals seldom showing their face in the marketplace. And not because they are “new” or “chic” but because the mad scientist passionately believes it’s there desperately waiting to be discovered. 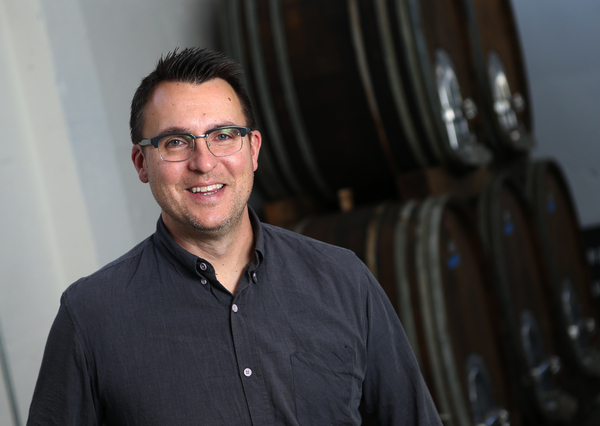 My job means I have tasted hundred of varietals, many of which are locked into predetermined destinies. Counoise for instance, lives only for its pre-arranged, massively polygamous marriage with Grenache, Syrah and a dozen others in Chateauneuf de Pape. Only when too much has been made does it see itself alone in a bottle, downgraded to the lowly caste of a Vin du Pay. Nero d’Avola is grown in the heat Sicily and for centuries was only suitable in the oxidized Marsala version. Over the past few years, it’s been bottled as a dry red and is known more for being affordable than for any sophistication. The Counoise shows a remarkable bright raspberry and cranberry on the nose and vibrant acidity barely restrained by a little grip. The Nero was the cleanest and most elegant I’ve ever had. The best Scilian Nero’s are still manly, unshaven creatures with a little manure on their boot bottoms. This is a fundamentally different, feminine “Nera” with a partial carbonic bringing crazy bright red fruit, dramatic acid and a whisp of sandy, earthy.
Chris is committed to all organic or biodynamic with sparse SO2 made possible by utmost respect for the fruit. Seldom have I seen such dedication to purity of fruit from harvesting at night to natural yeasts to multiple fermentation techniques in concrete, oak, or beeswax lined terracotta. He has the courage of his own convictions that doesn’t seem fed by ego or accomplishment but fed by passion and curiosity of what treasure is awaiting discovery in this year’s 130 year old Carignan or any of the other generally reclusive other varietals. Across his line up, the wines don’t come off as a “new take” on these varietals but more like a true appreciation and actual realization of their potential. Well worth embarking on your own treasure hunt through the strip mined, Central Valley’s soul-less wasteland to discover. It’s California wine as it can be not as we’re told it should be. Enjoy!
Next stop Sonoma…. But I have to get back to work now!
Barney Treadway
President WEI
Share| Share